Currently: A journalist reporting from East Africa for The New York Times and other publications

I live in Kampala, Uganda, in East Africa. After graduating from Skidmore College, I moved to Kigali, Rwanda, and from there moved to Kampala. I lived for several months in South Sudan while covering that nation’s independence in 2011.

What do I enjoy best about my work? The motorcycle rides, the helicopter flights over the volcanoes of eastern Congo and the floodplains of Sudan. Having what I write be read by those who matter.

My Upper School classes at VCS had everything to do with where I am today (second only to my parents' influence). 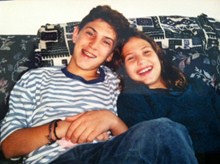 We read Steinbeck. We played 16th century explorer computer games. We learned of the Renaissance and what came after. We dug into myths of ancient civilizations in Latin class. We learned about the world, and how to express ourselves. Between the sixth and eighth grades we wrote our first short stories. And it was the first time I wrote something true—about when my uncle passed away. We wrote and wrote, and it was my first true love. VCS pushed the pebble that turned into a boulder that turned into an avalanche.