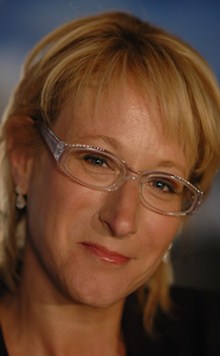 I was in the first graduating class at VCS. We knew we were on the frontier of something awesome! It was just the building of St. Veronica’s. We didn’t have a library or a gym. We started out with only a sixth grade the first year then we added a seventh grade the next and then an eighth grade the following year. We didn’t have any older kids to model our behavior after.

There was a direct connection between my English classes at VCS and “The Daily Show.” We would do comedic writing. We would write satirical plays about our families where we’d skewer them in those Day-Glo notebooks. It was my first venture into comedy and satire. Jeannie Altschuler and I wrote a scene where my brother was dead and my mother was serving my brother because he was organic. (My mother back in the ‘70s was the first to jump on the organic, sustainable food bandwagon.) It was okay to eat my brother because he was organic. Who knew this would become my life’s work? Everyone adapted the assignments to what their creative desires were and I just gravitated towards comedy and satire. Jeannie’s and my work then was not that different from the brainstorming sessions on shows that I do now.

A lot of us are still really close. Susanna Aaron, Jeannie Altschuler and I went to UNIS and remained friends forever.

The mantra was always “We Shall Overcome.” We were taught as children that we don’t judge others by the color of their skin - tolerance and inclusion are imperative.